When the son you sent to Australia with dreamy eyes returns dead in a bag kept in cargo, what will you say about the ministers who tweet away their time when the motherland's children are being assassinated just for being Indians?

I haven't seen anger or sincerity on the part of the governance or any political leader coming out strongly to teach these Aussies a lesson they will not forget. Why? There was an unfortunate Australian family killed in Orissa and the entire white world stood up in unison, even threatening severing of diplomatic ties. What happens now when an Indian, one of us, is killed by Australians? And Nitin Garg is not the first Indian to be attacked -- he died without anyone helping him -- and Indians in Australia believe the Australian government will do nothing to stop these attacks as racism is too deeply ingrained in their system. Indians are welcome as money providers to their educational industry but not as equally respected humans.

What comes first? Money or izzat -- the self-pride? I would prefer sleeping half fed rather than losing my pride and freedom. Make money but with your spine intact is the mantra for any civil society's progress.

If just money made nations, Qatar, Brunei and Liechtenstein would have been the greatest ones. Those making a hyperbole of various states' growth rates must remember this. India is passing through an identity crisis fuelled by the failed gods who don high positions and use it not for enhancing public morale and material power but for their personal benefits as the rai bahadurs of the British colonial era did.

If the people are insecure, the society has lost pride in its heritage, a state power makes it obligatory to be low on the fundamental content that gives an identity to the nation and its people, there is no collective memory of the joys and pains of the past and a resolve to take revenge on the barbaric wrongdoers, the new generation is taught alien values that make it almost hate its own indigenous traditions, then a platform called desire can be built like Dubai and San Diego, but not a nation.

The thing that makes a society radiant with a civilization dating back to thousands of years takes a millennium to create. It presents a history of one people, one land. A history of ups and downs, of victors and the vanquished, but all those share one vision and one ancestry woven with different threads and colours. That's us, as Hindus, no matter what you or someone down in your family chose any stream of faith or another name of a god. How does it matter? Why should a change in faith reflect in the change of my ancestors and heritage? It's impossible by any stretch of imagination or social engineering. It's sinfully barbaric surgery if one enforces the deletion of the past with the change of faith.

Here is a republic that celebrates its new-found status through the instrument of denying its past and disapproving its hoary traditions. So much has been the pressure of its state power that even those organizations which were once created singularly for Hindu rejuvenation and to defeat the assaulters are now singing a "secular" anthem of building roads and praising NREGA. What a fight these gods with feet of clay fought!

The gods of media, corporate world, bureaucracy and of course politics thrive on one mantra: "Have money, will be happy." How false!

It's the state of mind that makes one happy or sad and not the money. A boring repetition of an old saying. Annihilate the terrorists, ensure safety and izzat to the brand "Indian" everywhere on this globe. Then tweeting any lines and singing "blue moon" songs may look justifiable.

Here are a set of people who enjoy political supremacy and jump the queue to get into a Kumbh for a photo op, visit Tirupati, prostrate before the King of Ayodhya, but do absolutely nothing to serve the cause of those places of highest reverence that quintessentially make a Bharatvarsha. They go on destroying the bridge Rama built, do nothing to rebuild Ayodhya, never for a passing reference give the Kumbh a high place in their travel and cultural advisories and ad campaigns and instead use the pictures of the half-clad bathing devotees and naked sadhus as a tool to take a dig at a society that feeds these power centres.

This state filled with an intense hatred for anything Hindu comprises of the instruments of information, entertainment, constitutional authority and workstations of profit. A very small example is of the encroachment clearance by the noble-hearted law enforcer "secular" authorities -- all parties and all shades of courageous leaders included.

They raze a hundred, sometimes more, roadside Hindu temples. Fine sir, law's supremacy must be maintained. But never ever would they dare to touch the adjacent structure of a maulvi's weird imagination. A dargah, a place of Islamic worship, built right in the middle of the huge square, next to a military installation, inside an international airport, over a bridge, all are allowed because the state power recognizes the continuity of the invaders' legacy -- don't touch them. Only the "heathens and pagans and infidels" are to be taught law.

They all ensure that the cause they are taking up doesn't involve any one who is a "borne secular". Hence Rizwan's case was taken up, Not Rajneesh's case. Hence Ruchika case becomes a do or die matter, rightly and I too joined it. But why Ameena Yusuf's case was left untouched? Because nothing should be done in any case where a non-Hindu stands a chance to be put in the question box?

So a dargah can't be touched, a Qutub Minar, built after demolishing Hindu temples, as the board of the Archeological Survey of India pronounces at the site, should be saved and Metro route be changed, but Ram Sethu must be destroyed to earn hot money.

And then we celebrate a Republic Day, under the shadow of a structure that was built not for those who fought for Indian independence but for those who lived and died for the British empire. They call it a part of their heritage and say wow, what a great India Gate!!

I see the blood of the patriotic Indians beneath it. My fault?

Where is the structure in the memory of Bhagat Singh, Chandrashekhar Azad, Ashfakullah Khan, Hanifuddin, Vikram Batra or Abdul Hameed on New Delhi's Rajpath?
Why are we made to bow our head before the memorial of those who protected the colonial power?

Terrorists are escaping, terror nations are threatening us and we are smiling and making gestures of friendship. Is that secularism good for a nation's security?

Recognise the fact that it was the Hindu majority that opted for a republic that was not a Hindu state. It was a Hindu majority that ensured with no obligation equal rights to every Indian without considering what their faith or way of worship is. The Hindus happily chose non-Hindu heads of state, accepted a Christian to run the nation de facto without a murmur and put their destiny in the hands of those who belonged to a different stream of religion. Where on this planet would you find such large-heartedness and an unbelievable level of trust in human beings without caring which colour or faith they belong to? America? UK? Germany? China?

That's the state of the state we call a secular republic.

So our gods have done this so far.

More than a quarter of Indians live below a line the state calls the line of poverty. It means living at less than Rs 20 per day. There are analysts who say such people comprise more than 40% of the population.

The secular state so far hasn't been able to provide good roads, a functional and trustworthy public health system, an uninterrupted power supply to non-VIP sections of society, an administration at least with a little less corruption, and basic amenities of water to villagers. And we have travelled six decades of "secular" governance.

So the question is what republic are we going to celebrate this 26th January? The republic of the alienated billionaires of the parliament and corporate class? Of the childish sections of the media?

Celebrating a republic that boasts of ministers who are not known for their performance in the department they are supposed to work but for tweeting and eating away cattle feed and murdering their assistants?

The story of the Indian republic is fast becoming a story of failed gods. The beginning of 2010 gave us stories like Indians being sold as cattle in Saudi Arabia, Indians being stabbed to death in Australia for just being Indian, Indians being killed in India for being patriotic Indians, and a Lilliputian government gifting another salt bag in the form of a Saghir Ahmad report to Kashmiri Hindus who are forced to observe their exile's second decade this 19th January. The only way out is strengthening the people's power to throw out the false gods and establish a rule reflecting the true spirit of the republic.
Posted by Tarun Vijay at 1:51 AM

Treat those from IITs, IISc, AIIMS and other presitgious institutions as national treasure. Impose hefty Exit Tax if they leave the country within 5 years of graduation. Simple as that. If this issue makes us stand up and act, I will thank the thugs in Australia. 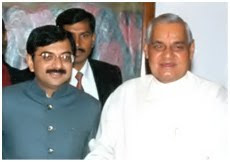 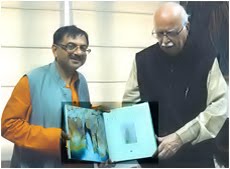 A book on Himalayas is presented to Shri L. K. Advani on his birthday, 8th November, 2010 by Shri Tarun Vijay 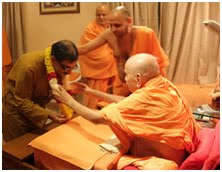 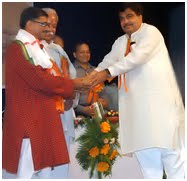 Tarun Vijay on live radio in Houstan May 2010

Shri Tarun Vijay (Center) with the Prime Minister of Nepal Shri Madhav Nepal at Oberoi, New Delhi on 19, Aug, 2009.On his left-Shri Rajan Bhattarai(Advisor to PM on Foreign Affairs).

The Chinese think big, we don't

The Times of IndiaTuesday May 19, 2009 Rajesh Kalra

Kasab Se, why is that man smiling?

The Times of IndiaAnshul Chaturvedi Wednesday May 13, 2009.